The final section of the Epilogue makes the Lion look like a bit of a buffoon, though. May 08, Christian rated it it was ok. At first I was furious with the beginning action sequences because the traitor legions seemed to behave so damn stupidly in their loses. By the end of the book, things definitely evened up. This book is definitely for those who think of Chaos in black and white and wonder why anyone would be 'stupid' enough to secceed from the Imperium.

Wake up! In many ways, Chaos is just like the Imperium. Chaos will give you everything you've ever wanted in At first I was furious with the beginning action sequences because the traitor legions seemed to behave so damn stupidly in their loses.

Be aware. Traitors are everywhere! Good book! I can understand where the rebels are coming from. Cant wait to buy my next ones. View 1 comment. Jan 11, David rated it liked it Shelves: science-fiction. Very engaging, especially knowing what eventually will happen to Caliban. This story arc was totally uninteresting. So many unanswered questions!!! As a Dark Angels space marine player in my youth, I desperately want to know the answers. I will have to wait for the next Dark Angels book I suppose.

Dec 29, Matthew Hipsher rated it really liked it. This is a turning point in the Heresy series, as we see how Horus's actions affect non-astartes humans and planets embroiled in civil war.

An awesome story and a great ending! Apr 27, Dylan Murphy rated it really liked it Shelves: horus-heresy , reading-challenge Fallen Angels details the Dark Angels schism and the very beginnings of the birth of the Fallen. The story was extremely well written and paced, constantly switching from Nemial on the frontline to Zaraheil or something like that back on Caliban. The action scenes were awesome, and the drama between the Calbinites and Crusaders was amazingly well done.

The only thing I didn't like about the book was that the Heresy didn't really seem like that earth shattering of an event. Other novels have really shown that no one could even fathom the thought of heresy and betrayal, and this novel fell short on that end. Despite that, extremely fun to read! Feb 05, Taddow rated it really liked it Shelves: warhammer The civil war within the Dark Angels Chapter always intrigued me and the presentation of the set-up for this conflict was pleasantly unexpected.

Lastly, without giving away any spoilers, I was glad to see some insight into the mysterious Lord Cypher who I find very intriguing the in the tabletop game and the fluff related to the Dark Angels. A must read for any Dark Angels fan. Feb 27, Mel rated it really liked it Shelves: warhammerk. Even though this novel is in the Horus Hersey, it deviates greatly from the previous books. There is no mention at all of the events surrounding Horus's betrayal. Instead, this book follows the Dark Angels, before they were discovered and after they became Astartes.

For once, this was an actual story no tied in to any other novel, and I really liked that. It was nice to present a Primarch before anything was ever known of the Imperial Terra. Well-crafted characters and a plot that didnt branch o Even though this novel is in the Horus Hersey, it deviates greatly from the previous books. 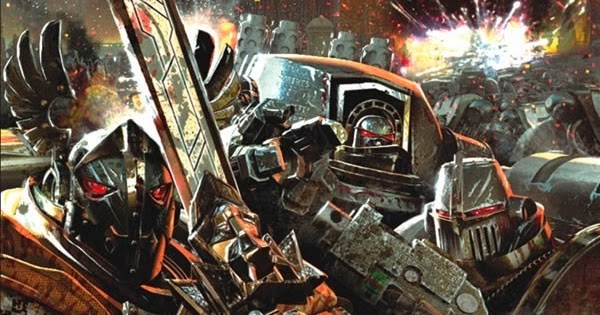 Well-crafted characters and a plot that didnt branch out too much or leave the reader hanging. Feb 28, Gerard rated it really liked it. As intense as others.

Yet unravelling the war : Warmaster against Imperium, order against chaos and the warp luring at the end of everything. Jul 30, Rebecca rated it it was amazing. It was a masterpiece! Sad, but the adventure itself and how gutwrenching everything was made it a very awesome book! Apr 18, Kelly Charmaine Marie Flanagan rated it really liked it. This book, being the second half of Lion El Jonson's story, answers many of the questions brought around by the first half. I've noticed a very different trend in the H.

Since both series run side by side as far as the timeline goes, they do not seem to mesh. In fact, they tell very different stories regarding Horus. And I must admit I am far from finished it. But the divide in plot lines is already happened, so I don't think that is all important. Horus is shown to be a good Primarch and loyal to a fault to his father, the Emperor. Then whispers begin to show him that the Emperor isn't really going through all this, in fact never was doing it for "humanity's sake".

No, even the Master of Humanity has his own plans for the future, we are a means to an end. Now this does fit with the small bits we have learned about the greatest psyker to have ever lived. Where the two series divide is that in G. But in the H. H series we have no inkling whatsoever of this. We only get impressions of the Emperor being other than or more than he explains.

Of Horus, nothing positive is said. In fact time after time in H. Was this done on purpose? I didn't check to see which were written when, but you'd think Black Library would have good enough editors that could catch this sort of thing before printing. If anyone reading this happens to have an answer to this, please let me know. This would have to be one of my favorite 40K novels so far. Its a fantastic continuation of the last Horus Heresy novel featuring the Dark Angels legion and it pickups almost right where the last book left off following the same characters.

I think every writer of military fiction should watch the first half of Aliens. James Cameron does an amazing job of introducing the marines, and within a line or two of dialogue you know that squad and you feel for them. That film is the benchmark for me of creating an ensemble squad of characters in a short amount of time. And the dialogue is some of the most quotable material in all of fiction.

Luther is just pants. The book makes Zahariel the awesome dude that actually did everything. Luther just seems to sit around, brooding and delegating the major task to Zahariel. And when an actual decision needs to be made towards the end of the book, he is indecisive and panicked. There are two types of Dark Angels in this book; the ones with Nemiel and Johnson, who are your regular baddass astartes, and the ones on Caliban, who are a bunch of jilted sadassess.

The dudes left on Caliban are just sad. I guess the authors of the two Dark Angels books tried to make him mysterious, but they ended up making him vague. I really liked it when Nemiel called him on this, and Johnson was all indignant about being called on his BS. His practice of sending problems back to Caliban and forgetting about them is utterly brainless. And finally, we see him get conned by one of his brothers.

The Lion might be a master strategist and a combat machine, but he is a terrible judge of character. Well, not the Emperor himself this time, but his policies. Compliance sucks, it really does. Any resistance is brutally crushed. Moustache twirling evil-bastard award — Magos Archoi. I like the Magos Archoi plot twist, it homages Mechanicum and he manages to pull a Primarchs pants down. I like how, because they are barely human, most people find them impossible to read or understand. I always thought a major forge would be a little tougher than that.

They reveal who he is, his motivations and why he was made Cypher. If anything, it makes Johnson into a bigger fool than he already was. Mike Lee writes reasonably well, and I think he excels during action sequences. The plot is what kills this book….. I hope this story picks up a bit in its 3 rd chapter. LG II 13 June at Newer Post Older Post Home.